Log in
Search
Latest topics
» we made the news

» Hi I'm Blythe and new to this site

» we lost the mayor race

I couldnt remember which topic the council rates discussion was in so Ive started a fresh one.

This letter made it through the matrix of controlled media this week, in a local paper in Melbourne. 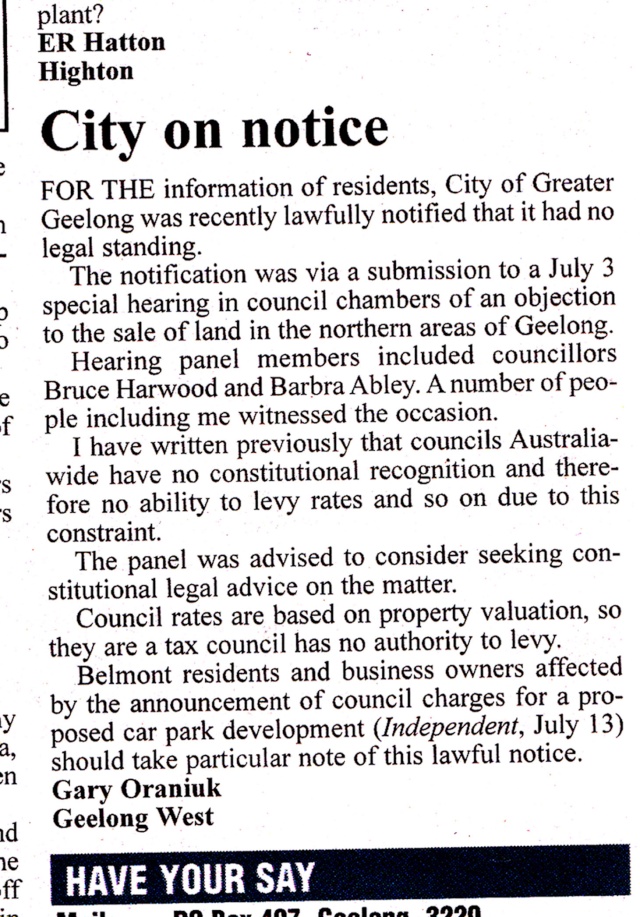 There are all kinds of court battles going on over this at the moment.
Local council is the tip of the iceberg of course.
The whole fucking show is a sham.
Best as I can figure out so far is that Gough Whitlam and Lance Barnard formed an unprecedented 2 man cabinet after he was elected in 1972 , and for 2 weeks put through a swathe of preprepared legislation which superimposed the corporate entity called the commonwealth of Australia for the real government. Which was owned by us with coincidently the same name.

Both these guys were Fabian Socialists, like Hawke. Keating, Gillard.

The Fabian's goal is a one world communist state created by stealth and ruse.

Our real government still exists but is dormant. In that we are British Subjects with all the rights and freedoms associated with that status. Which are substantial.
Under the corporate slavery of Australian citizenship we have no rights whatsoever. Not even the right to own gold , silver or land.
Communism basically.

Why do you mighty white men of inherent valour and genius continue to contract as slaves?
When will you turn off the propaganda machine in your lounge rooms and wake up to the fact that you're being sedated whilst robbed of everything of value?

Sorry, I got carried away. Where was i ?
Oh yes, the corporate fascimile of government brought in by Whitlam has no lawful , constitutional basis and is treason. You need not contract with it, in fact you have a duty to oppose it.

This includes the corporation calling itself your local council. And trying to trick all of us into thinking they have the power to impose tax. They don't.

You may think its a good thing to pay money for local services. That's because you're ignorant of your incredible wealth. The birth right of Australian born British Subjects may well be more financially valuable than any other place in the world. We own all those minerals being pulled from the earth. OWN. Divide them by 20 million and see how rich you are.
Pretty bloody rich.
Our real law decrees that that wealth is held in common (the commonwealth of Australia) and used for these services. It would pay for all our common needs including pensions and so on, many times over.
But its being stolen via privatisation of our assets and misappropriation of our mining royalties.
So no you don't have to pay tax to have services you buffoons! You already are.

Also for those who might wonder why the right of politics doesnt stand up to this facsimile of government, they too are controlled by the pope. Either as direct catholics or freemasonry. I should also note that communism is a tool of the vatican. Its not some concept dreamed up by Marx as your schoolmaam told you.
The Fabian Society whilst English in origin, was actually created under a different name in France by Jesuits then moved to England where it established falsely independant roots. To distance the society from the roman catholic origins.
I've forgotten the ins and outs of this , but I looked into it a few years ago and did a thing about it on my antivatican radio show that only 20 bloody Australians listened to. MORONSSSSSSSSSSSSSSSSSS

Ok I'm too emotional to continue this post. I despise you all.